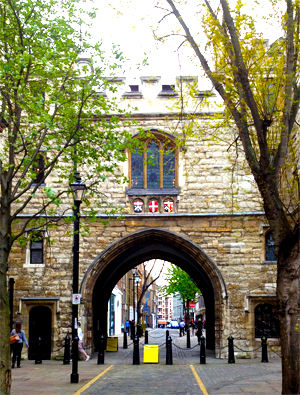 Here’s some background about where we’re based (and where your mail is handled if you use our mail forwarding service).

Clerkenwell is in the London Borough of Islington. The name originates from “Clerks’ Well” an actual well dating back to the middle ages that still remains visible from the Well Court building on Farringdon Lane. We’re based on St John Street, the pictured St John’s Gate is located just a minute’s walk from our office.

Other “historical” landmarks include:

• Smithfield’s Market
• The execution site of William Wallace (Braveheart)
• The Crown Tavern – the pub where Lenin and Stalin apparently first met
• The Eagle – London’s first gastropub (Clerkenwell is now a foodie’s dream with restaurants including St John, Club Gascon and Moro all being in the area)

Cineastes may recognise Clerkenwell from a number of films. Skyfall, Eastern Promises, About a Boy, The Dark Knight Rises and 28 Weeks Later all had scenes shot around here.

Clerkenwell is now considered the hub of the UK’s design industry and hosts the aptly titled Clerkenwell Design Week, “the UK’s leading independent design festival”. The design boom (previously Clerkenwell was associated with the printing industry) has resulted in a real buzz. Rarely are the multiple bars and restaurants empty, it’s only at the weekend that things slow down and even then there’s Fabric nightclub.

Clerkenwell’s location is a huge selling point. Nestled snugly between the financial square mile, trendy Shoreditch and Central London, it’s at the heart of London’s business activity. This, and the fact that it’s such a hub for creativity, makes Clerkenwell the ideal place to base any business from.