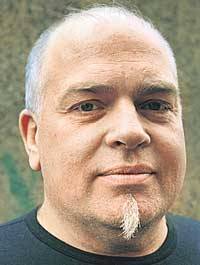 Louis Savy runs Sci-Fi London, the world’s largest film festival dedicated to Science Fiction. The festival showcases the latest Sci-Fi films, large and small. It’s no surprise then that Sci-Fi London receives DVDs by the bucketload from film-makers dying to get their film on the programme. So how does a busy man like Louis cope with all this mail? With a little help from us of course!

“Having an external mailing address where I know someone’s there 9-5:30, five days a week is very handy. If something needs to be signed for, I know somebody’s there who can do it. Then my mail is secure until I come and pick it up”

“There are some film-makers who think that if they stand in front of me, we’ll show their film. We have a really simple rule, if we like it we’ll show it. I don’t really want to get into a discussion about why it’s not being shown as I don’t want to hurt someone’s feelings. So having an external address is a really good way of filtering people”

“The central address puts us firmly in London. If I ever decide that I want to live in the countryside for six months, it doesn’t matter. I still have a London address.

Most of the content that we screen comes from overseas, so when I’m talking to Americans, if I said “send everything to Grimsby”, they simply don’t know where that is, but they know it isn’t London. We’re called Sci-Fi London. This is our address and it works very well”

For more information about Sci-Fi London, take a look at their site: