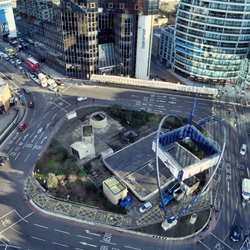 Silicon roundabout, just a few minutes walk from us.

Speaking recently at a seminar in New York, Mayor Michael Bloomberg said that he believes London, not Silicon Valley, to be NYC’s closest rival when it comes to hi-tech start-ups:

Old Street roundabout (also known as Silicon roundabout), situated just a few minutes walk from our office, is now considered the tech start-up hub of the UK with companies such as Moo, Moshi Monsters and Last.fm all being based around the area.

An ideal time to have a London Presence then!